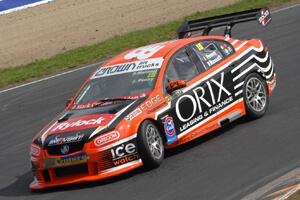 Penny Homes are not just Master Builders for NZ! On the last weekend in September Managing Director John Penny has once more shown his motorsport skills when the first 3 rounds of the V8 Supertourers Endurance Series were contested at Hampton Downs, North Waikato.

On 28/29 September John from Penny Homes Racing teamed up with Paul Manuell in the ORIX Commodore. After Paul had his hair shaved off for the good cause, raising over $7,000 for cancer charity Canteen, the duo went from strength to strength on the race track.

Paul qualified the ORIX Commodore in a strong 7th spot while Penny Homes’ John commenced Race 1 from the back of the grid, gaining valuable positions both on the circuit and in the pits. A very slick driver change earned them a well-deserved 8th spot by the end of the nearly 1-hour endurance race.

In the warm-up lap for Race 2 the ORIX Commodore suffered a rare mechanical failure and was unable to start. However, with the transmission replaced, the ORIX Commodore took out an incredible 11th place even though John and Paul had started near the rear of the field. Their consistent and highly competitive lap times bode well for the next endurance race at Hampton Downs this weekend.

By the way: John isn’t the only one at Penny Homes who is into their sports. Our Taupo Project Manager Chris Rangi is currently training hard for the charity boxing event Zero Risk King of the Ring which will be held in Taupo on 7 December.